Districts
"The city of the two cities", Modica Alta and Modica Bassa connected by picturesque stairs and 17 bridges. Modica Sorda is the residential area where to shop.
The physiognomy of Modica is one of its most fascinating features. It is certainly not easy to imagine. In fact, its unusual urban configuration is due to the caves that are the basis of its territorial structure.

Located in the southern area of ​​the Iblean Mountains, it is referred to as the "city of the two cities," Modica Alta and Modica Bassa, or the two areas in which it was originally divided into. The first was developed around the castle, the second along the streams which have since been covered. The new residential district of Sacro Cuore was added in the 1960s, and is traditionally known as Modica Sorda.

Modica Alta is one of the oldest districts and used to stretch from the northern walls of the castle to the current Church of St. John. Its buildings are perched on the rocky mountain: a set of small and ancient houses , with its lights, gives the town an appearance of a suggestive crib.

Until the early tenth century, Modica Bassa was characterized by the presence of two rivers that crossed it, the Ianni Mauro and Pozzo dei Prun, which were then concreted over because of several floods. They flowed along what is now known as the main street - Corso Umberto I - and then joined the river Moticano (also named Fiumara), a torrential stream of water in south-eastern Sicily. The meeting between the two rivers occurred just below the Clock Tower of the Castle of the Counts of Modica. As many as 17 bridges had been built above the two rivers that linked the different sides of the city, so that Modica was known as the most distinctive city in Italy after Venice, in the early editions of the Enciclopedia Treccani. Modica Sorda is the latest district to have been built. Originally it was the point of transition for pilgrims, who stopped to take refreshment at an inn which was owned by a nice old deaf woman. Nowadays it’s an area of ​​shopping centres, shops and modern buildings.

Modica Alta and Modica Bassa are still connected by a series of characteristic staircases, even today. Its original function was to enable the inhabitants to reach the river in the lower part. Today these stairs feature on every tour itinerary, in order to discover the heart of the city.
Did you know... 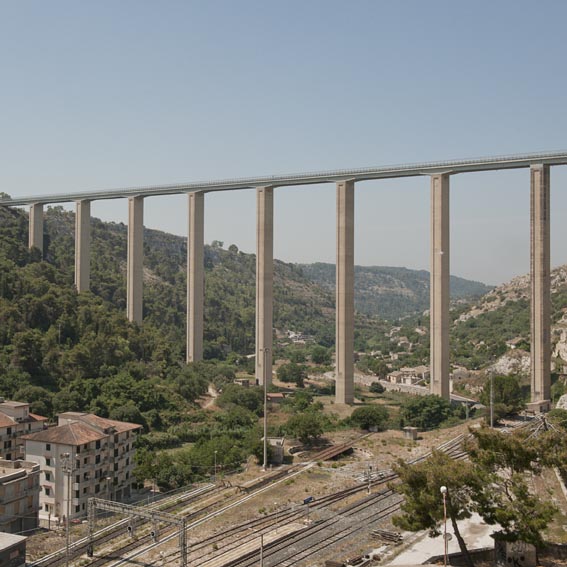 The Guerrieri bridge, which goes over the south of the town of Modica, joins the two hilly districts of the city together, the Sorda district and the Dente district, by passing the deep gorge that divides them, through which the torrent of Modica flows. When it was built, and for many years after, it was considered to be the highest bridge in Europe. Today it is still one of the highest.
Other articles about Modica
Brief History
Architecture
Famous people
Modican desserts
Chocolate
where To Eat
See more »

where To Stay
See more »