Cathedral of San Giorgio
Monument symbol of the Sicilian baroque and heritage well. The church houses paintings, sculptures and works of art as the "Santa Arca" and "meridian pavement".
St. George's Cathedral, listed as a World heritage Site by UNESCO, is the symbol of Sicilian Baroque. As it appears today is the result of the sixteenth and seventeenth eighteenth century reconstructions, which occurred following the disastrous earthquakes that struck Modica in 1542, 1613 and 1693. The latter, which was especially devastating, struck the southeastern end of the Sicily, which is commonly known as the Val di Noto. The reconstruction, more sumptuous and magnificent than ever before, was entrusted to the famous architect Rosario Gagliardi from Syracuse, who had already designed St. George's Cathedral in Ragusa.

The church was re-opened with a solemn ceremony in 1738. It has five aisles, with 22 columns with Corinthian capitals. Sumptuous and magnificent, it guards precious paintings inside, like the "events of the Gospel and the life of St. George", painted by the 'Raphael of Sicily' Girolamo Alibrandi in 1513; "The Assumption", a painting of the Tuscan school, by the late Mannerist Florentine Filippo Paladini (1610); a naif painting on wood, "The Nativity", by the painter Carlo Cane from Milan (attribution uncertain), during the second half of the seventeenth century; the canvas (1671) of the "Martyrdom of St. Hippolytus" by Cicalesius. You can also admire a marble statue of the Gaginiana school, Our Lady of the Snow from the workshop of Mancini and Berrettaro, in 1511; the altarpiece of the main altar, made up of 10 wellplates, was initiallt attributed to Girolamo Messina Alibrandi as a work of 1513, but, according to recent studies, was actually work by the late Mannerist painter Bernardino Nigro from Modica, created in 1573. The "sundialpavement" and the "treasure" of the church are particularly noteworthy. The latter includes, among other notable pieces, the "Holy Ark", a work of art covered in silver, which contains the relics of the saint. The temple is dedicated to the martyrs St. George and St. Hippolytes, and between the aisles you can admire a fully functional monumental organ with four key boards, 80 registers and 3000 reeds, which was built between 1885 and 1888 by Casimiro Allieri from Bergamo. The imposing cathedral, with its daring tower at the front, stands on a flight of 250 steps, built in 1818 by the will of the Jesuit Francesco Mauro. It has a beautiful front facade.
Did you know... 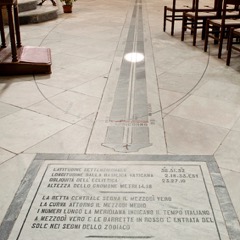 Visiting the church at noon you can see the sundial pavement in action. The sundial marks the local noon, when it enters from the hole of the gnomon at the top on the right. On the left of the sundial, a tombstone floor contains an indication of the geographical coordinates of the church, and as a result, also of Modica.
Cathedral of San Giorgio on the map
Altre cose da vedere
Cathedral of San Pietro
Church of S. Maria del Gesù
Church of S. Giovanni Evangelista
Church of Carmine
Church of San Domenico
Church of Santa Maria di Betlem
Church of San Francesco
Sanctuary of Madonna delle Grazie
where To Eat
See more »

where To Stay
See more »